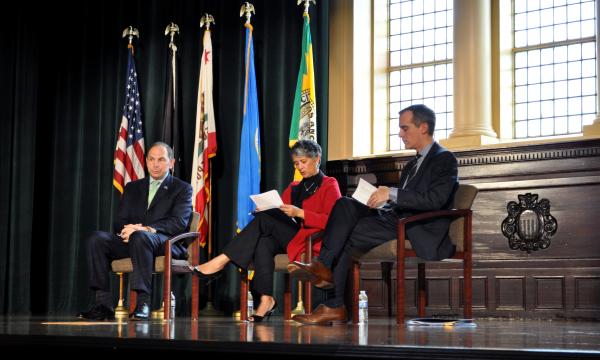 Veteran Todd Edhlund received an injury and was honorably discharged from the Navy thirty years ago. Without much external support, he found himself living in his car for years. After hearing about new resources, he approached the VA and asked for help. He was provided housing in Boyle Heights. “Catastrophes happen to everyone. …You just have to be someone without a safety net. And that was me. It takes considerable effort of everybody involved to overcome these catastrophes, and I appreciate everybody who has been to these past couple of meetings,” said Edhlund.

Veteran homelessness fell 30% across LA County from 2015 to 2016, while the number of unsheltered veterans decreased by 44%. More progress is to come thanks to Proposition HHH, a recent initiative that gives $1.2 billion in bonds towards ending homelessness in Los Angeles. The upcoming March 7 ballot includes Measure H, which will bring new resources to organizations serving LA County’s homeless if passed.

At the end of the talk, city and county officials were invited to reaffirm their commitment to ending Los Angeles homelessness for veterans by signing a poster. HACLA CEO Douglas Guthrie and Section 8 Director Carlos VanNatter readily signed the board to show their support.

According to 2015 demographics, veterans make up 11% percent of Los Angeles’ homeless population. This percentage will be updated after the Homeless Services Authority’s annual Greater Los Angeles Homeless Count, which takes place January 24-26, 2017.